Yesterday evening I learned that a large grant application that I’d submitted earlier this year had failed to secure funding.  Statistically there was a high likelihood of this happening but that doesn’t make it feel any better: weeks and weeks of work have come to nothing.

So in a mood of bloody-minded contrariness and general displeasure at the unfairness of the world I thought I’d provide an alternative to the Bees’ Needs week I mentioned yesterday by focusing on food crops that look as though they should be insect pollinated (and their ancestors certainly were) but which don’t actually require pollinators.

The example pictured above is an F1 hybrid cucumber (Cucumis sativus) variety called “Mini Munch”, kindly grown from seed and given to me by my friend and colleague Dr Janet Jackson.  Many cucumbers don’t need insect pollination, despite their large, colourful flowers, and the fact that related crops (melons, courgettes, squashes, etc.) generally do require pollinators.  Indeed some varieties taste bitter if they are pollinated.  I can recommend this web page on how to grow cucumbers for further advice.

As I was taking that photograph, and in another demonstration of how the world is against me at the moment, I spotted a bee feeding on one of the all-female flowers of this variety.

It spent some time there probing the centre with its tongue, so I think these flowers still produce nectar despite them not needing pollinators, a hang-over from their ancestry.  Plants have a whole range of mechanisms that ensure reproduction without the agency of insects and other animal pollinators, and this has been exploited by crop breeders who have selected crop varieties for their ability to self pollinate or to reproduce asexually via apomixis (as in the case of this cucumber).

The same bee then flew onto a tomato (Solanum lycopersicum) flower (another group which varies in its demands for pollination) and I got a better look – seems to be a Leaf-cutter Bee of the genus Megachile.

The final example of a crop which requires little or no insect pollination are the chillies (Capsicum spp.) all of which are self-pollinating, I believe.  This variety is a scrambling purple type called Orzoco*. 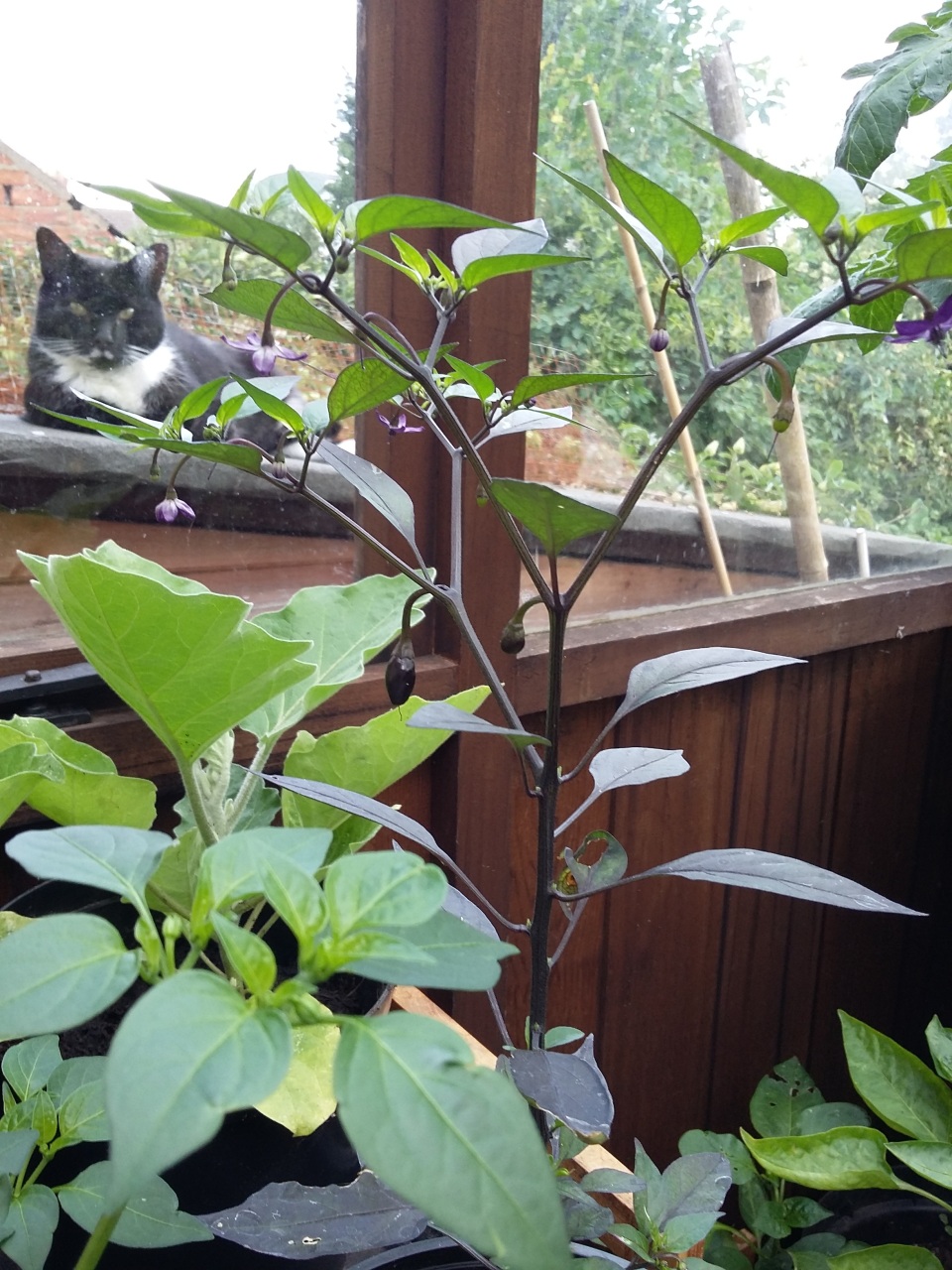 So, crops vary hugely in their need for pollinators and the presence of certain traits of animal pollination, such as large, brightly coloured flowers and nectar, is no guarantee that the crop really does have to be serviced by pollinators.  The only way to be certain is to experimentally test the plants, a topic I hope to come back to later in the summer.

Don’t worry, this grumpiness won’t last long, in no time at all I’ll be back to banging on about the importance of pollinators.  At least Monty, one of our two cats, still loves me.

*At least, that’s what it said on the seed packet; I’ve also seen it referred to as Orozco – does anyone know which name is correct?