A land of fire and water: Australia reflections part 3

Fire and water; those opposing elements have been our constant companions during this trip to Australia.  All the major international news media have been reporting on how serious the bush fire situation is in the south east of the continent.  In East Gippsland, Victoria, tens of thousands of residents and holiday makers have been advised to leave the area.  Four thousand of those who haven’t left were forced to spend last night on the beach, as fires got closer to the town of Mallacoota.  These are just the latest examples of climate change refugees in their own country, something I highlighted in a post about our visit to the USA earlier this year.  Of course, Australia is a continent that is used to bush fires, they are nothing new.  But what is new is the scale of these fires and the extended drought and high temperatures that are making the landscape more flammable than ever.

There’s currently a lot of media discussion in Australia about how landscapes were managed historically by Aboriginal peoples, whose selective and regular burning of the bush reduced fuel loads.  Karin and I have just returned from Port Macquarie where we enjoyed Christmas with an Australian branch of our family.  Several of them have spent a considerable amount of time working with remote Aboriginal communities in the Northern Territory.  We were told a story about an Aboriginal elder who asked one of our relatives to drive him out to an area of bush that had not been burned for over a decade.  It was that elder’s role to burn this land at regular intervals, a family tradition that went back generations.  Having driven for several hours along dirt roads, the elder asked to stop; he hopped out of the vehicle, went up to a patch of dry grass, and casually set fire to it with a small lighter he was carrying.  After pausing a few seconds to make sure that the flame had caught he hopped back into the car and said “Let’s get out of here”.  An hour back down the road the companions stopped and looked back.  The whole landscape was aflame, with a column of black smoke rising, I was told, in a mushroom cloud “like a nuclear explosion”.

This sounds extreme, but these areas are isolated and a long way from any human settlements or infrastructure.  Such activities have been part of toolbox of ways in which Aboriginal peoples have managed these landscapes for thousands of years.  By burning areas on a regular cycle the negative effects of large, out-of-control fires are reduced, and opportunities for seedling establishment and fresh foliage for animals to browse are created.  There’s more information about these practices here and here.

In the more heavily populated parts of Australia, and in the adjacent national parks, fires have long been suppressed, such that when they do occur they are much more violent conflagrations, over a greater area, than would normally be the case.

On one of our trips near Port Macquarie we came across an area of woodland that had burned recently, separated by a small road from an adjacent block that had not burned.  In the following set of images I’ve alternated the two blocks so you can see what the woodland looked like before and after burning.  But remember that this was not an especially intense fire; the trees are still living, and there is foliage in their crowns.  Once there’s been some rain and a chance for the vegetation to regrow, the previously burned block will look identical to the currently unburned area.  Indeed in one shot you can already see some green shoots emerging from the ground: 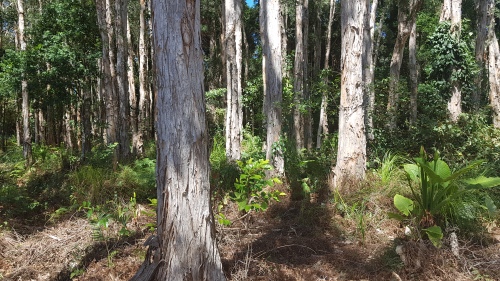 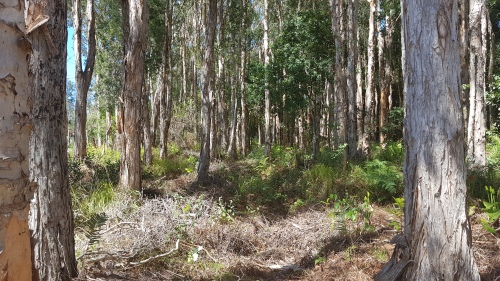 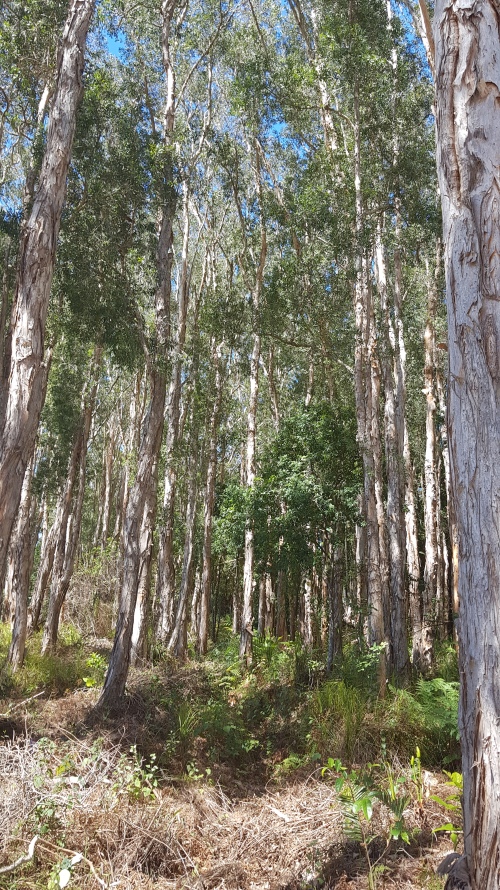 So fire in itself is not a problem for these natural communities.  What is a problem, for nature and for the communities of people who live in and around these woodlands, is the intensity, the scale and the frequency of the fires that are currently occurring.  This morning Karin and I watched silently to a news report of yet another volunteer fire fighter who had lost his life overnight.  In this case he had been part of a crew whose 10 tonne fire truck had been lifted up and overturned by cyclone-strength winds created by the blaze itself – there’s a BBC news account of the tragedy here.  “Unprecedented” is a word we’re hearing a lot on ABC News.

Evidence for the number and size of the fires was everywhere in and around Port Macquarie, as we observed when we took a drive up to the peak of North Brother Mountain in Doorgan National Park.  From a height of about 470 m (1500 ft) we could see some amazing panoramic views of the region that also showed black fire scars on the landscape – this is looking south: 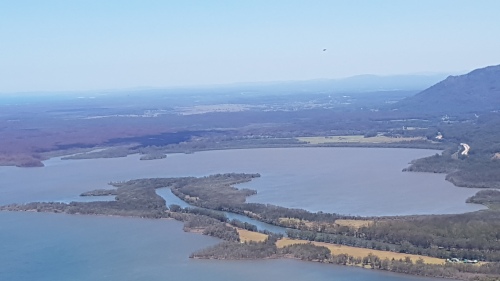 Looking north there’s little evidence of the fires – some have occurred there but much smaller in scale.  But there is a lot of that second element, water.  We were able to explore some shallow coastal lagoons fringed with grey mangroves (Avicennia marina): 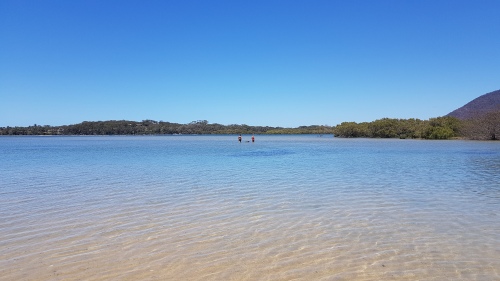 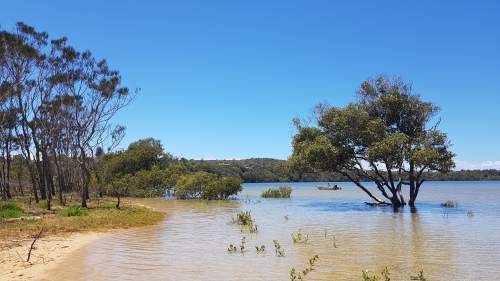 Mangrove habitats are fascinating places that are ecologically important as nurseries for marine fish and invertebrates.  They also provide physical protection to coastlines, acting as a buffer to storm surges that would erode the land.  In recognition of this, a recent project around Port Macquarie has involved restoration of these mangrove areas and was instigated by commercial oyster farmers and a local fishing  society.  I’m particularly intrigued by the upward-pointing aerial roots of mangroves; termed pneumatophores, they function to provide oxygen to the trees, but also increase the physical complexity of the floor of the lagoon, providing habitats for small animals: 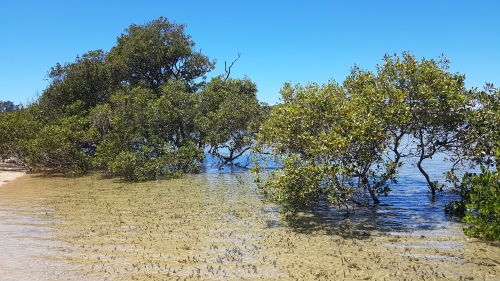 But evidence of the drought in this part of the world is never far away.  On our seven-hour train trip back to Sydney we passed mile after mile of parched farmland, with dried-up waterholes and dust-filled streams.  The only thing stopping it from burning is the absence of vegetation:

As I complete this blog post, it’s 31st December and we’re back in Coogee Bay, ensconced in the apartment of my colleagues Angela and Stephen.  They have headed to Stephen’s native Canada to visit family.  It’s going to be cold!  We’re very happy to house sit and see in the New Year in warmer climes.  Best wishes for 2020 to all of my readers: let’s hope that it’s the start of an environmentally more enlightened decade.

13 responses to “A land of fire and water: Australia reflections part 3”