Over the past two festive seasons I have posted about the research we published assessing the auction prices of holly and mistletoe, two culturally important seasonal crops that are 100% pollinator dependent for berry production.  The first post was called Insect pollinators boost the market price of holly and mistletoe: a new study just published; the second was The holly, the mistletoe, and the pollinators: an update on an old story.

Follow those two links to get the full background to this research and a link to the original paper published in the Journal of Pollination Ecology.

I’ve collated the auction prices for the 2018 season and added them to the time series data set, and it’s clear that something very interesting has occurred.  Both berried holly and mistletoe have achieved record-breaking average prices, whilst auction prices for material without berries have hardly changed at all.  Here are the updated graphs; each data point is the average price per kilo paid at an auction: 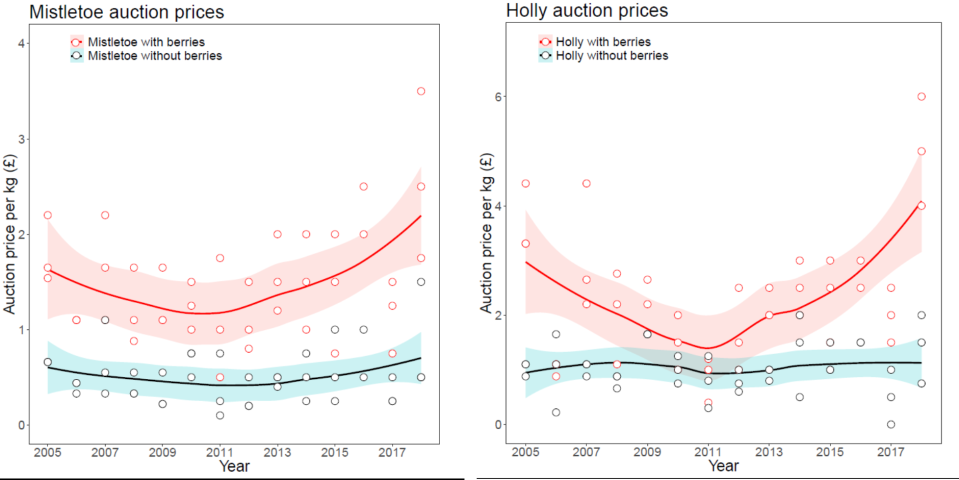 So what’s gone on this year?  What could have affected the auction prices?  One interesting possibility is that the long, dry summer of 2018, a likely consequence of climate change, has negatively affected berry production in these two species.  This could come about if the holly or the mistletoe host trees are water stressed and shed part of their berry crops.  It’s unlikely to be a consequence of too few pollinators as these species flower too early in the year to have been affected by the dry weather.   We have more work planned in the future using these data and this will be an interesting question to address.

Yesterday I popped out to do some Christmas shopping and tried to buy mistletoe at a local garden centre.  That’s the second time I’ve tried this year (the first was at a nearby green grocer’s) and the second time that I’ve been told that they have none because it’s very expensive this year and not worth stocking.  That seems predictable from the wholesale auction results I’ve just described.  Has anyone else in the UK had similar experiences this year?

The British holly and mistletoe market is relatively small and clearly seasonal, and probably not worth more than a few millions of pounds each year.  However it seems to be very sensitive to external factors and may be a microcosm for how some crops, at least, might respond to future extreme weather brought about by climate change.  Brexit might also have an effect in the coming years as we import a large amount of mistletoe from northern France.  But then Brexit is going to have an effect on large areas of British society…..

On that sour note, Happy Christmas to all of my readers, however you voted in the referendum.  I hope you have a restful holiday, spending it as you wish, with the people you want to!  And if you, or someone you know, are spending the festive season on your own this year, take a look at Karin’s latest blog post:  Preparing a Christmas Just For You.

14 thoughts on “Climate change at Christmas: did the hot, dry summer of 2018 cause the record-breaking prices of holly and mistletoe?”