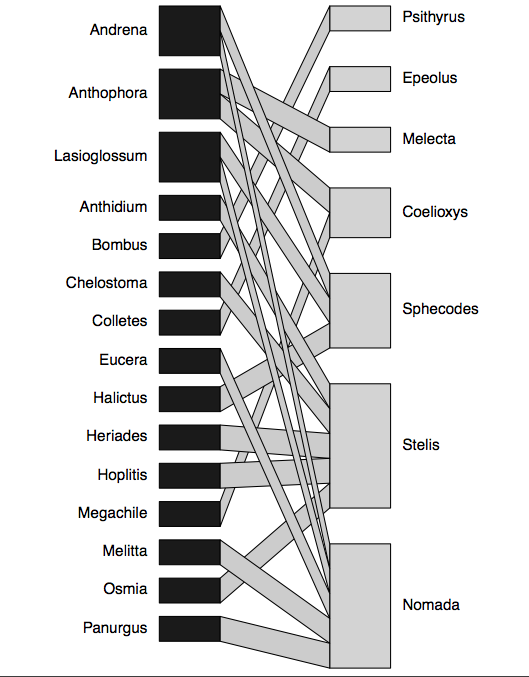 The British bee season is well underway with lots of reports on social media of queen bumblebees (and even workers in the south), and male and female solitary bees (especially early emerging mining bees – Andrena).  In my own garden I’ve already spotted a couple of bumblebee species, plus the Hairy-footed Flower Bee (Anthophora plumipes) and the Grey-patched Mining-bee (Andrena nitida), amongst others.  Running alongside the emergence of these nest-building bees is a whole suite of “cuckoo” or “cleptoparasitic” bees that, as the name suggests, lay their eggs in the nests of other bees, consuming the pollen that has been collected and, usually, the eggs and larvae of the host bee.

The specificity of the interactions between the cuckoos and their hosts varies a lot.  Some are very host specific, such as the bumblebee sub-genus Psythirus that only parasitises other Bombus species.  Others are much broader in their host use, such as the genus Nomada that parasitises five other British bee genera.

Personally I struggle to recall which cuckoo bees interact with which host bees, especially for those with a broader use of hosts, so I thought I would construct an aide-mémoire in the form of an interaction graph using the R package “bipartite”.  I took the information on which cuckoo bees parasitise which hosts from Steven Falk’s recent (and very good) book Field Guide to the Bees of Great Britain and Ireland.  If anyone spots any errors, please let me know!

The bipartite graph is structured such that the hosts (to the left, in black) are ranked from most to least parasitised (in terms of number of cuckoo genera that interact with them).  The cuckoo bees (in grey on the right) go in the reverse order, from most specialised to least specialised.  Note that this set of interactions only applies to Great Britain and Ireland; breadth of host-parasite interactions is wider on the Continent and elsewhere in the world.

Here’s a link to a better quality PDF of the plot that you’re free to use for your own use: Cleptoplot

Here’s the data matrix (Clepto) and here’s the R script if you want to play with it:

#Basic plot of the web

#To turn the plot 90 degrees and centre the image, change spacing and text size, colours, etc.

#Note: save the figure as a PDF, much better quality than PNG

#With thanks to Kat Harrold who provided some of the script