On a recent visit to Dublin, where I’m External Examiner for some courses at UCD, my host Dr Jan-Robert Baars took me on a short early evening excursion south of the city to Booterstown Marsh.  What a great little nature reserve it is!  It’s tiny (only 4.3 ha) and is boxed in by urban development on all four sides.  To the north there are buildings; to the east runs a busy main road and housing; on the southern side is a car park and the entrance to Booterstown train station, with the railway line completing the rectangle of infrastructure to the east.  Beyond that is a beach and the open water of Dublin Bay.

The reserve is largely saltmarsh, fringed with trees, with a freshwater stream coming in from the north (visible in the bottom right corner below.

As the tide turns, seawater rapidly ebbs and flows from the reserve, bringing with it food particles and nutrients for the plants and invertebrates of the marsh.  The next photograph was taken only a few minutes after the previous one.

If you click on these photographs above to maximise their size you can see something of what makes this reserve so special – the bird life that is supported by those plants and invertebrates.  The very abundant dark birds are Black-tailed godwits, the white ones are Black-headed gulls.  During our visit, which lasted less than an hour, we saw a total of 12 species including other wading birds such as Dunlin, Oystercatcher, Little egret, Grey heron, and Redshank.  These are birds that one often sees from a distance, foraging on lake margins or mudflats.  But here they are just a few metres from a busy railway line which funnels commuters to and from the city every day.

Whether by accident or design the open-ended station bridge makes a great viewing platform; here you can see Grey heron and Little egret.

At its eastern side the bridge looks over Dublin Bay and provides further birding opportunities.

If you have the opportunity to visit Booterstown Marsh (and I strongly recommend it) there’s a useful guide produced by the Irish Wildlife Trust.  This urban nature reserve is one of the most interesting I’ve ever visited, because it affords the opportunity to get very close to a diverse assemblage of birds that are not normally so confiding.  Clearly these birds feel secure despite the rumbling traffic and the dashing trains.  I almost envy the local commuters!

If you think you know of a more interesting small urban nature reserve I’d be interested to hear about it – feel free to comment below. 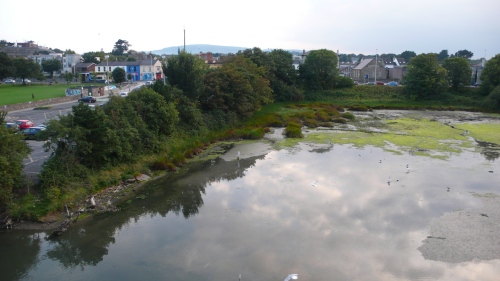 My thanks to Jan (pictured below on the bridge) for introducing me to this wonderful site.  The final list of birds that we saw on the reserve was:  Black-tailed godwit, Dunlin, Grey heron, Little egret, an unidentified duck, Black-headed gull, Redshank, Oystercatcher, Woodpigeon, Moorhen, Mute swan, Jackdaw.  On the Dublin Bay side we also spotted Pied wagtail and (from a distance) a Curlew. 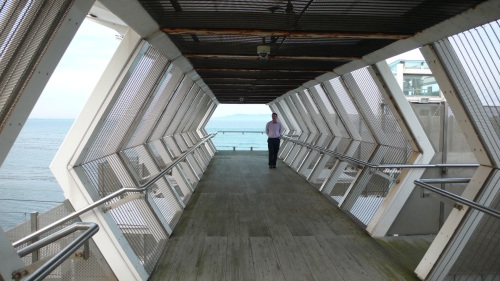 4 responses to “Is Booterstown Marsh the best small urban nature reserve in Europe?”