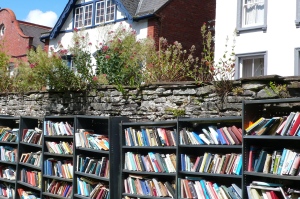 Old stone walls have always held a fascination for me.  Growing up in Sunderland I’d see substantial walls made of the local Magnesian Limestone, rough cut blocks often patterned with impressions and ridges that to my child’s mind looked like exotic coral or fossils of weird animals.  A friend reliably informed me that an odd shaped piece we had found was a “fossil dog’s skull”.  I didn’t believe him.  Even then I was skeptical of unsubstantiated claims.  When I understood more about the intriguing geology of that part of England I discovered that these patterned rocks were of chemical rather than biological origin, but no less interesting for that.

Walls then seemed to become a continuing back drop to my life.  As an undergraduate my final year research project involved clambering around on the 17th century walls of Oxford University’s Botanic Garden, surveying the plants that had naturally colonised them.  The wall flora was an odd mix of exotics and natives, many of which had no obvious means of dispersing on to the walls.  I joked at the time that perhaps the dispersal was by gardeners and ecologists working on the walls.  That may have been close to the truth.

Stone walls provide unique habitats for many plants and animals as they mimic rocky out crops and cliff faces.  Perhaps less obviously, so too do brick walls, as I saw on Friday morning which I spent having a grateful break from the office with Hilary Erenler.  Hils is one of my research students and is funded by the Finnis Scott Foundation.  For the past couple of years she has been surveying the pollinating insects found in the gardens of large country houses around Northamptonshire and into adjacent counties.  Our county is particularly rich in these estates (it’s known as the County of Spires and Squires, a nod to both the large number of churches and the historical pattern of land ownership).  So on Friday we conducted a couple of surveys of some large walled gardens on two private estates.  Amongst other things we measured the lengths and heights of the walls, counted a sample of the density of mortar holes that may have been nest sites for solitary bees such as Osmia rufa.  We also returned some soon-to-emerge bee cocoons to artificial nests as part of an experiment Hils is conducting.

For reasons of privacy and security I’m not allowed to divulge which estates we visited.  But I can say that the walled gardens were fascinating relics of a time when such large households and their staff relied on these sheltered,  productive patches to provide food twelve months of the year.  One garden had retained an avenue of some of the oldest espalier apple trees I’ve ever seen.  Thick and gnarled and festooned with epiphytic lichens and mosses, they must have been planted at least 100 years ago.  Whether the household appreciated it or not, the wild native bees that the walls hosted, and those coming in from the surrounding estate, also played their role by pollinating these apples, as well as pears, cherries, nectarines, beans, squashes and other insect reliant crops.

On the way back to the car we found a small patch of violas, primulas and celandines in a dry spot under a tree.  We counted at least 6 species of bees: two bumblebees (Bombus species); at least two (possibly three) andrenids, including the tawny mining bee Andrena fulva;  Anthophora plumipes; and what may have been a Colletes species.  The bumblebees were queens, of course, filling up on nectar to give them energy to look for nesting sites.  But some of the solitary bees were males and exhibited their typical behaviour of patrolling the flowers in search of females with whom to mate.

Back in the office that afternoon I dealt with emails.  One was an unexpected communication from Steve Buchmann regarding a recent paper I’d published with Nick Waser and Andreas Erhardt in Journal of Pollination Ecology.  The paper deals with the historical development of some ideas pertaining to pollination syndromes.  I’ve admired Steve’s work for a long time; together with Gary Nabhan, Steve wrote the now classic book Forgotten Pollinators which can be credited with playing an important role in raising the issue of pollinator extinctions and declines in the public and scientific consciousness.  The JPE paper gives a historical perspective on understanding the interaction between Solanum flowers and their pollinators.  The long standing assumption is that Solanum flowers are pollinated by bees that vibrate their bodies at a particular frequency to shake out the pollen from the anthers, a reproductive strategy termed “buzz pollination”.   Steve was writing to tell me that many years ago he published a paper showing that some Solanum species are buzz pollinated by hoverflies.  I’d missed that paper so am looking forward to reading it when he scans it and sends me a PDF.  It worries me that much of the primary literature from before the widespread use of information technology is going to get neglected like this, because it’s not easy to access electronically.  Depositories that have started to archive older work, such as JSTOR, Biodiversity Heritage Library and Google Books, are great, but there’s still a lot of material to retro-input into these systems.

On the way to invigilate a one hour test for my second year Habitat Ecology and Management students later that afternoon I bumped into Muzafar Hussain, another of my research students, who had been out surveying solitary bees in the urban centre of Northampton.   His first year of surveying in 2011 revealed a surprisingly high diversity of species and he’s continuing that work this year.  Some of these bees are nesting in old stone and brick walls in the back streets behind the main thoroughfares of the town and are exploiting wall plants as pollen and nectar sources, a topic that’s being researched by Lorna, one of my final year project students.  Everything was coming back to walls today…..

10 thoughts on “The Walls of the Garden”