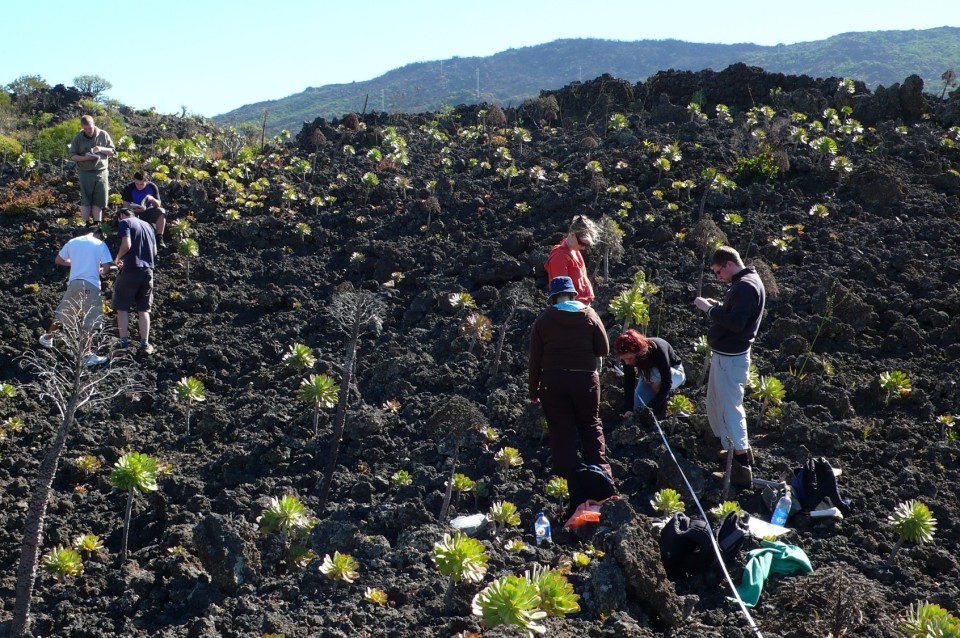 This is the text from a book review that’s published this week in The Niche, which is the British Ecological Society’s members’ bulletin.

The Canary Islands mean many things to different people.  To the millions of holiday makers each year they are places of relaxation, of sun, sand, sea and holiday shenanigans.  To Charles Darwin, writing during the early weeks of the Beagle voyage, they were the “long wished for object of my ambition”.  Having read accounts of Tenerife by earlier explorers such as Alexander von Humboldt, Darwin was excited to have the opportunity to visit “perhaps one of the most interesting places in the world”.  Sadly it was not to be: an outbreak of cholera back in Britain meant that the Beagle’s crew would have to be quarantined for 12 days before they could disembark.  Captain FitzRoy was not prepared to do this and so the Beagle moved on.

I recount this story to my University of Northampton students each April when we visit Tenerife for our annual field course.  Referring to it as “Darwin’s Unrequited Isle”, I point out how fortunate they are to live at a time when a short plane flight can take them from the UK to such a fascinating natural laboratory of in situ evolution and biogeographical processes (Figure 1).  We’ve been going to the island since 2003 and we’re certainly not the only European university to do so, I know of at least five others in the UK alone.

To ecologists and those interested in natural history the Canary Islands are a fascinating mixture of the exotic and the banal.  Endemic succulent spurges (Eurphorbia spp.) grow with non-native prickly pear cacti (Opuntia spp.), traditional cafes serving tapas and local wines butt up against sports bars providing a full English breakfast with a pint of Carlsberg for less than five Euros.  The rapid development of tourism on the islands means that there are enormous pressures on land for building apartment complexes, as well as on water resources, energy generation and wastes management.  The islands are a laboratory for sustainable development as much as they are for evolution.

The literature on Canary Island ecology, biogeography and conservation has grown quickly, much of it fuelled by the education opportunities afforded by the islands.  As the authors of Vegetation of the Canary Islands note, the book is both “a synthesis of numerous publications….[and data and experience].…from many years of teaching and research…at the University of La Laguna”.  This fieldwork-focused, dusty boots approach to understanding the Canary Islands flora is apparent throughout the volume which has clearly been a labour of love for the highly knowledgeable authors.

The book is divided into eight chapters, plus appendices. Chapter 1 entitled Geographic Framework gives a summary of the physical geographical and geological context of the islands in relation to the rest of Macaronesia, and explains something of the human history of indigenous peoples (collectively termed the Guanches) and the later European colonisers.  The population of the islands (estimated to be 2.1 million in 2016) swells by an order of magnitude with close to 15 million tourists visiting that same year.  One of the attractions for north Europeans is dealt with in Chapter 2 Canary Climate   Although categorised as subtropical, the weather can be hugely variable, especially on the more mountainous islands; we have experienced blistering heat, torrential rain and snow storms in April in the higher reaches of Tenerife (which at 3,718 m is the second highest island in the world).  Irregular and geographically sporadic rainfall is a particular feature. This leads neatly into Chapter 3 on Bioclimatology that relates this climatic variability to the plant communities of the islands.  A sense of how complex this is can be gauged from Table 3.4 that lists 57 different bioclimatic combinations and their associated vegetation types, many of which overlap.

Chapter 4 on Biogeography considers how the islands have been colonised over a time scale that goes back more than 65 million years, including islands that no longer exist, having eroded and become submerged, but which in the past acted as stepping stones for colonisation of species from the continent and between archipelagos.  This includes some fascinating speculation regarding the role of much earlier island groups to the south west of the Canary Islands that may have allowed exchange of plants between Africa and the Americas, and that could explain some intriguing disjunctions in current distributions.  There is also a very useful summary of endemic genera.

Chapter 5 Other Floristic Considerations initially looks at the non-vascular flora of algae, fungi, lichens and bryophytes, which is rich (5508 species compared to 2091 vascular plants) though the rate of endemism is not so high.  There is then more comparison of diversity and endemism between plant families and islands, followed by a summary of molecular taxonomic findings.  Given how short it is I think that this chapter could easily have been incorporated into the previous one, though that’s a minor criticism.

The bulk of the book (from pages 83 to 308) is taken up by Chapter 6 Vegetation of the Canary Islands which provides a very detailed arrangement of the flora in the classical Braun-Blanquet form using names adapted from the species that are characteristic of that community (“Nerio-Tamaricetea”, “Morello fayae-Pinetum canariensis”, etc.).  To ecologists not trained in this tradition, and more used to the National Vegetation Classification (NVC) scheme familiar to us in Britain, this terminology can seem a little daunting.  Fortunately the introductory section provides a broader classification of the vegetation into categories such as “Euphorbia scrub and shrublands”, “Laurel forest”, etc.  This is a good stepping off point for anyone interested in understanding the vegetation further, before plunging into the subsequent sections that examine these communities in great detail.  The later coloured maps of the potential natural vegetation of the islands, without anthropogenic interference, are especially useful for teaching.

This leads us into Chapter 7 which deals with Changes in the Natural Landscape Through Human Influence.  As the authors point out, people have influenced the vegetation since the earliest period of human settlement on the islands, about 1000 BCE, as these arrivals brought with them livestock such as goats, sheep and pigs, as well as useful plants.  However this process was hugely accelerated from the 15th century onwards as Europeans rapidly conquered the islands and cleared large areas of forest, as well as introducing many more invasive species.  The chapter ends with a very thought provoking section on climate change and its likely effects.

Chapter 8 considers the Conservation Status of the Canarian Flora and Vegetation, providing a history of how protected areas were set up, including the designation of seven UNESCO Biosphere Reserves and two Natural World Heritage Sites. Lists of protected plant species and their various designations are also provided and there’s a short summary of invasive species.

The four appendices give: (1) an over view of the phytosociological scheme for understanding the communities; (2) a short history of botanical exploration of the islands,  which emphasises just how many botanists and ecologists the archipelago has attracted over the years; (3) notes on the ethnobotany of the islands; (4) and a long list of relevant literature, extending over 18 pages.  A weakness of the book is that the literature is not cited within the text, presumably for reasons of readability.  This does make it much more difficult to track specific sources of information back to its origin, however. The text concludes with two indices, one phytosociological and one taxonomic.

The book is well illustrated with both colour and black and white photographs and figures, though the quality of some of these in the e-book version that I was provided with for this review were not as sharp as they could have been.  I hope that the print version is better quality.

Vegetation of the Canary Islands will appeal to anyone interested in the ecology of this most fascinating of archipelagos, though at £119.99 for the hardback it is expensive.  It should certainly be bought by any library of a university that carries out teaching and research on the islands.  The earlier and later chapters will be of most use for students and their teachers; the central sections on phytosociology really require more specialist knowledge, though there’s a lot of fascinating ecology in there for the patient reader.  One thing that did surprise me about the book is that the role of fire in determining the type of vegetation in an area is hardly considered, except as it relates to the negative consequences of large wild fires.  Yet many of these habitats must have burned naturally before people arrived on the islands, as evidenced by the amazing ability of Pinus canariensis to re-sprout after it has burned (Figure 2).

During our field course in Tenerife the students and staff spend a week exploring the different plant communities of the island, as well as bird and bee behaviour, and half a day of sea mammal observation.  I’ve used it as an opportunity to conduct long term data collection that otherwise would never get funded (see Figure 1), and some of this research has already been published.  Two other books that I’ve found useful and which should be on the bookshelves of anyone wishing to learn more about Darwin’s Unrequited Isle are: Natural History of Tenerife by Philip and Myrtle Ashmole (2016) and Tenerife Nature Walks by Sally Lamdin-Whymark (2013).  Both are available on Amazon.

Figure 1:  University of Northampton students surveying a population of Aeonium urbicum, Santiago del Teide, Tenerife, 2008.  This monocarpic species is the subject of long-term data collection to assess what triggers flowering.

Figure 2:  Post-fire regeneration of Canary Island Pine (Pinus canariensis) on Tenerife 2008-2017.  Most species of pines are killed by fire; P. canariensis is one of the few that can re-sprout following a burn. 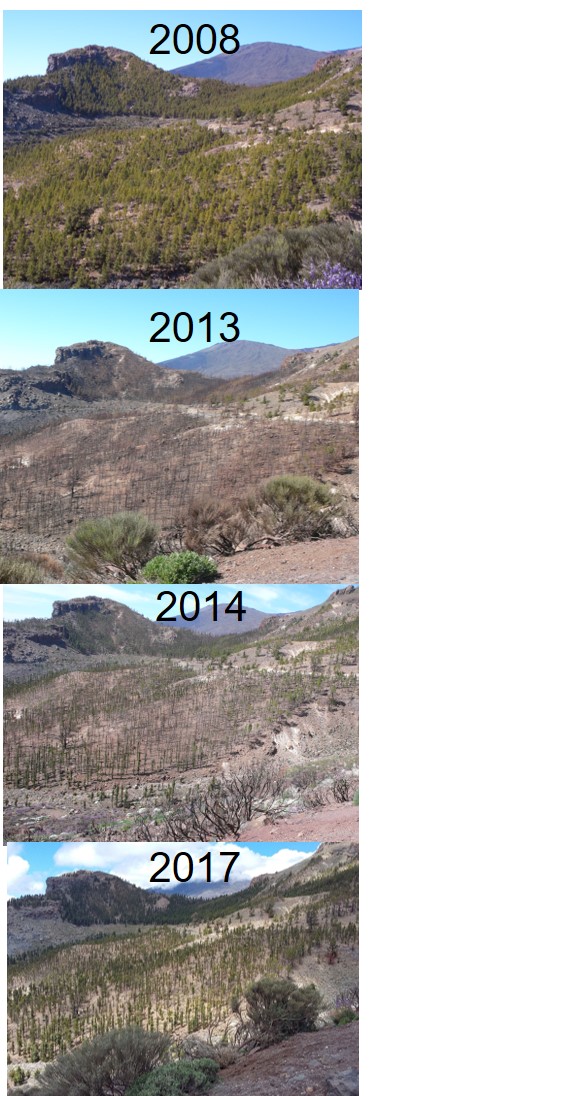