The evolution of insect pollination: a new essay just published 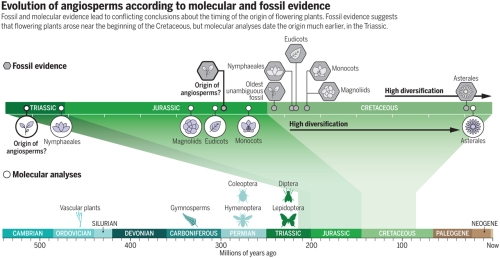 In the latest issue of the journal Science you’ll find a commentary essay entitled: “The origins of flowering plants and pollinators“, written by Casper van der Kooi and myself.  It’s open access so do go and read it.

This commentary brings together some  recent findings in palaeontology, molecular phylogenetics, and pollinator sensory physiology and behaviour, to discuss the progress that’s been made in understanding the deep-time evolution of this most familiar and charismatic of ecological interactions.

The short version is that the old conceptual models are absolutely wrong.  Some version of “first came the gymnosperms and they were primitive and unsuccessful because they were wind pollinated.  Then, at the start of the Cretaceous, the angiosperms evolved and they were insect pollinated and advanced and so more successful” continues to appear in text books.  But we’ve known for a long time that many of the Jurassic gymnosperms were insect pollinated.  This may (or may not) predate insect pollination of angiosperms: there are huge disagreements between palaeobotanists and molecular phylogeneticists about when the first flowering plants evolved.  The graphic above comes from our essay and shows just how big the discrepancy is: molecular models suggest an origin for the angiosperms about 70 million years prior to the first confirmed fossils.  That’s about equivalent to the whole of the Jurassic period!  There are similar disagreements when it comes to the evolution of pollinating insects: for the Lepidoptera (butterflies and moths) the difference between the earlier molecular and later fossil evidence may be as much as 100 million years.

As we discuss, there are huge implications in these discrepancies for understanding not just how major elements within the Earth’s biodiversity evolved, but also for the origins of pollinator sensory physiology.  Insect behaviours linked to colour vision and odour reception may in turn influence effective crop and wild plant pollination.

The image accompanying our essay is by the very talented biologist, science communicator and graphic designer Elzemiek Zinkstok – follow that link and check out her work.

In the past couple of weeks I’ve delivered two presentations at virtual conferences. The first was at a Global Sustainability Summit run by Amity University, one of our partner institutions in India. The second was at the University of Northampton’s own internal research conference. Both of these focused on pollinators, as you might imagine, but they also referred to the United Nations’ Sustainable Development Goals (SDGs). The 17 SDGs are being increasingly used as a framework for promoting the importance of biodiversity to human societies across the globe, and I’m seeing them referred to more and more often in studies and reports about pollinator conservation. That’s great, and I’m all in favour of the SDGs being promoted in this way. However I wanted to highlight a couple of aspects of the SDGs that I think are missing from recent discussions.

The first is that pollinators, and their interactions with plants, are often seen as contributing mainly to those SDGs that are directly related to agriculture and biodiversity. Here’s an example. Last week the European Commission’s Science for Environment Policy released a “Future Brief” report entitled: “Pollinators: importance for nature and human well-being, drivers of decline and the need for monitoring“. It’s a really interesting summary of current threats to pollinator populations, how we can monitor them, and why it’s important. I recommend you follow that link and take a look. However, in the section about relevant, global-level policies, the report highlights “the UN Sustainable Development Goals (SDGs) – especially regarding food security (‘zero hunger’) and biodiversity (‘life on land’).

I think this is under-selling pollinators and pollination, and here’s why. First of all, as we pointed out in our 2011 paper “How many flowering plants are pollinated by animals?”, approaching 90% of terrestrial plants use insects and vertebrates as agents of their reproduction and hence their long-term survival. As we showed in that paper, and a follow up entitled “The macroecology of animal versus wind pollination: ecological factors are more important than historical climate stability“, the proportion of animal-pollinated plants in a community varies predictably with latitude, typically from 40 to 50 % in temperate areas up to 90 to 100% in tropical habitats. Now, flowering plants dominate most terrestrial habitats and form the basis of most terrestrial food chains. So the long-term viability and sustainability of much the Earth’s biodiversity can be linked back, directly or indirectly, to pollinators. That’s even true of coastal marine biomes, which receive a significant input of energy and nutrients from terrestrial habitats.

Biodiversity itself underpins, or directly or indirectly links to, most of the 17 SDGS; those that don’t have an obvious link have been faded out in this graphic:

The underpinning role of biodiversity, and in particular plant-pollinator interactions, on the SDGs needs to be stated more often and with greater emphasis than it is currently.

The second way in which I think that some writers and researchers in this area have misconstrued the SDGs is that they seem to think that it only applies to “developing” countries. But that’s certainly not the way that the UN intended them. ALL countries, everywhere, are (or should be) “developing” and trying to become more sustainable. To quote the UN’s SDG website:

“the 17 Sustainable Development Goals (SDGs)….are an urgent call for action by all countries – developed and developing – in a global partnership.”

“the SDGs are a call for action by all countries – poor, rich and middle-income – to promote prosperity while protecting the environment.”

I interpret this as meaning that “developed” countries need to consider their own future development, not that they only have to give a helping hand to “developing” countries (though that’s important too). Just to drive this home, here’s a recent case study by Elizabeth Nicholls, Dave Goulson and others that uses Brighton and Hove to show how small-scale urban food production can contribute to the SDGs. I like this because it goes beyond just considering the agricultural and food-related SDGs, and also because by any measure, Brighton and Hove is a fairly affluent part of England.

I’m going to be talking about all of this and discussing it with the audience during an online Cafe Scientifique on Thursday 25th June – details are here. I’m also going to be exploring more of these ideas in my forthcoming book Pollinators & Pollination: Nature and Society, which is due for publication later this year. The manuscript is submitted and is about to be copy-edited. The PowerPoint slide which heads this post uses a graphic from that book that sums up how I feel about biodiversity, plant-pollinator interactions, and the UN’s Sustainable Development Goals.

One of the reasons why I don’t use reference management software….

….is that it creates nonsense like this! Now, I’m sure that spatial and temporal trends of global pollination have, indeed, benefited me – but that’s not the title of the paper! The actual title is “Spatial and Temporal Trends of Global Pollination Benefit” – full stop. I handled the paper when I was an editor at PLOS One and somehow my role has been bundled into the title by whatever reference management system the authors have used.

I won’t embarrass the authors by saying where it’s from, but it’s yet another example of something that I blogged about a few years ago – that reference management systems encourage sloppy referencing practices.

One thing that “Spatial and Temporal Trends of Global Pollination Benefit Jeff Ollerton” does get right, though, is subject-verb agreement – check out Steve Heard’s post over at Scientist Sees Squirrel on this very topic, and how a careful analysis of sentence structure can improve your writing.

Filed under Biodiversity, PLoS ONE, Pollination